Indian billiards and snooker player Pankaj Advani is married. The world champion took to social media to share the pictures of his wedding.

AC Milan has announced squad against Juventus on social media. Check it out below: 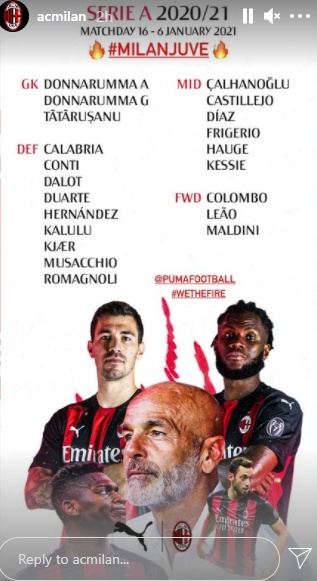 India have released their playing XI for the third test against Australia. Rohit Sharma, who missed the first tew games due to a hamstring injury has been included in the starting eleven. Navdeep Saini is set to make his debut for the national side.

NEWS – #TeamIndia announce Playing XI for the 3rd Test against Australia at the SCG.

Navdeep Saini is all set to make his debut.#AUSvIND pic.twitter.com/lCZNGda8UD— BCCI (@BCCI) January 6, 2021

Afghanistan and Ireland will face each other in a three-match ODI series in the ICC Cricket World Cup Super League tournament. The matches will be played at the Sheikh Zayed Cricket Stadium in UAE. The first ODI will be played on January 21, 2021, followed by games on Jan 24 and 26.

Sourav Ganguly is set to be discharged from the Woodlands Hospital, Kolkata on January 7 after suffering a mini-heart attack.

#SouravGanguly who is admitted here is doing well. He is clinically fit. He wanted to stay back in the hospital for one more today so he will go home tomorrow: Woodlands Hospital, Kolkata pic.twitter.com/PxNyZHxbEu— ANI (@ANI) January 6, 2021

New Zealand claimed the series 2-0 after defeating Pakistan by an innings and 176 runs in the second Test. Kyle Jamieson was the star for the Kiwis with the ball as the pacer took 11 wickets over two innings, Kane Willaimson also scored a sensational double century. Pakistan were bowled out for 297 and 186 in their respective innings while the Black Caps had scored 659/6.

Nathan Pongrass, the owner of Baby Village in Bondi Junction, Sydney, has rubbished the rumours of Virat Kohli and Hardik Pandya breaching the COVID-19 protocols. The owner said the Indian duo did not touch or shake hands with the staff while there and maintained ‘adequate social distancing’.

Barcelona are back in training after the team returned negative for COVID-19 in the latest round of testing carried out on Tuesday. The Catalans had halted their training after two members of the first-team staff had tested positive ahead of the Athletic Club clash.

We are back with yet another blog as sports fever continues to be high. We will be tracking the breaking sports news throughout the day with our live updates. From live score updates to match results, you will get all the major sports news here. The day gone by was another exciting day in the sporting world as we witnessed some tremendous on-field action. While South Africa thrashed Sri Lanka by ten wickets in the second Test to win series 2-0, New Zealand are on the verge of another thumping win against Pakistan. Bengaluru FC 1-3 Mumbai City FC, ISL 2020-21 Match Result.

Speaking of the Indian Super League (ISL) 2020-21, Mumbai City FC thrashed Bengaluru FC 3-1 in Goa to advance at the top of the team standings. While Indian footballers are plying their trade in ISL, the Indian cricket team is gearing up for the third Test match against Australia which gets underway on January 7 (Wednesday) at the Sydney Cricket Ground. Currently, the four-match series is perfectly poised at 1-1, and the winner of the upcoming contest will take an inevitable 2-1 lead.

Don’t get carried away with pace-friendly wickets in Australia: Kapil Dev to Indian bowlers...

Courage, resolve shown by you guys is unreal, enjoy this moment:...